Expressive street photography: how do you do it?

To my own and humble opinion, there are two types of photographs when speaking about street photography: documentary photographs, and expressive photographs.  The first will document what's going on in the streets, and they will show you what everybody else sees. Hang them on the wall, and people will maybe recognize where it was taken and then move on.

The second type, the expressive photographs, will make people think and look for deeper meaning.  Hang one of those on a wall, and people will stop and talk about it.

What I'm about to tell you, is something I've learned from a great photographer and a great human being, Phil Douglis.  Over the years, I've made my own version of his theory, but I cannot tell you how I create expressive photographs without mentioning this wonderful man, whose entire theory, complete with sample galleries, can be found here.

The very best expressive photographs contain three main elements: juxtaposition, incongruity and at least one expression of a human value.

Incongruous elements are a lot harder to find. You can find them, but that doesn't mean the incongruous situation lasts long enough for you to take that photograph, frame it well AND also have opposing elements and human value.
Incongruity could be a tree in the middle of a road, a car in the middle of a forest, or a cat in a fish tank.

Well, there are lots of those, and you don't necessarily need for a human to be in the frame in order to find human values, Love, hate, rage, anger, happiness, mourning, virtue, feelings, emotions... there's a lot to go around. 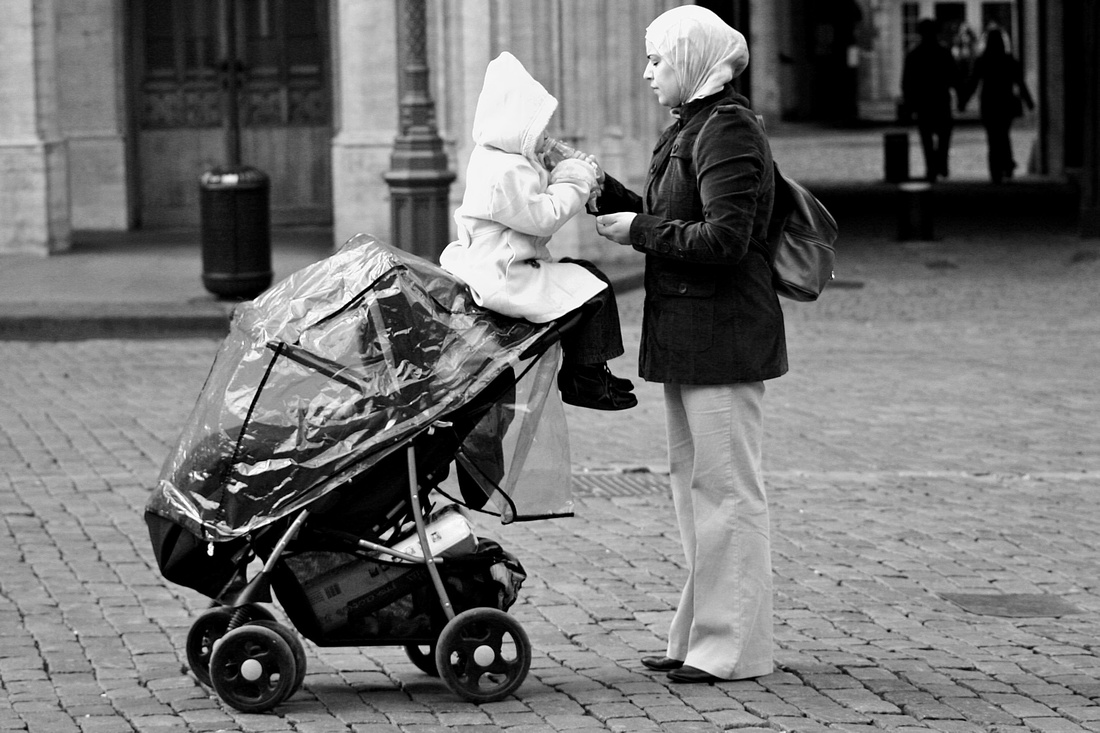 So, do you see the expressive value of the image above?  The child is small, the mother is taller, and they are opposite each other.  That's juxtaposition.  The child is sitting on top of the stroller, that's inconguous, isn't it?  And finally there's the love between the two, and that's a definite human value.

The fourth element comes to the rescue

Indeed, there's a fourth element, which is abstraction.  The more abstraction you can add into the frame, the less strong your other elements need to be. So if all else fails: make it abstract! You can do that sometimes by converting to black and white, or by applying heavy contrast for instance, but sometimes the abstraction is right there in the frame. Repeating patterns, or the sun causing lense flare.

So where to find those expressive images?

Go have a look at the World Press Photo award winners. Just about all of them have the three, and sometimes all four elements in them.

There's one single image that I think shows all of this more clearly than any other image I've ever seen, and that's the photo made by Spencer Platt, which won the award in 2007. It features a shiny convertible car, filled with neatly dressed young Lebanese people, cell phones in hand and all, driving by a scene of devastation, caused by artillery, where people are digging through the rubble.  It has juxtaposition in more than one way, incongruity is showing all over the frame, and opposing human values that cause the viewer to be ashamed.  You can find that awesome image here.